The Timber Creek Athletic Department would like to recognize and congratulate junior, Ayda Varela and senior, Alejandro Lopez on being voted as our Female and Male Gator’s Dockside Student Athlete of the Month for January. They both exemplified what it is to be a true “Student Athlete” on the field and in the classroom with their hard work, sportsmanship and teamwork.

Congratulations to these two s, our @Gatorsdkside Student Athletes of the Month!! 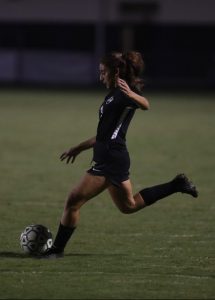 Ayda was nominated by Coach Uribe. Ayda Varela has been a rock on defense and has provided positive attack for the team during the latter part of the season. She has scored 4 goals this season along with an integral goal in the district quarterfinal game against Hagerty. She is without question, an outstanding student in the classroom as she is one of the top in her class, maintaining an unweighted 4.0 GPA.

Ayda starting playing soccer when she was 3 or 4 years old. She used to play basketball and volleyball as well but decided to dedicate her time to soccer when she was 10. She is an officer for the TCHS Beta Club, a member of Helping the Homeless Club, National Honor Society as well as Girls Who Code, which is a nonprofit organization that aims to support and increase the number of women in computer science by equipping young women with the necessary computing skills to pursue 21st century opportunities. Ayda plans to major in computer science when she gets to college.

Congratulations, Ayda! A well deserved award who represents hard work and character on the field as well in the classroom. 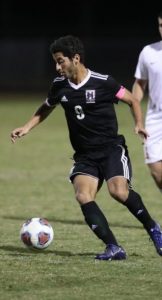 Alejandro was nominated by Coach Chehab. Alejandro is one of the captains on the varsity team this year and is his 4th year on the team. He is a provided leadership who by way of leading by example with excellent work ethic. Alejandro has 3 goals, an assist and a penalty kick in the month of January. He also scored a key goal in the team’s district 3-1 win over Oviedo. Academically, Alejandro is an outstanding student who is ranked 82nd out of 818 seniors, is top 10th percentile and maintains an unweighted 3.7 GPA. He is a member of the National Honor Society, President of the Spanish National Honor Society as well as member of the National Beta Club. He is also working on becoming an Assistant Bio-technician.

Alejandro starting playing soccer at the age of 5. At the age of 6, he played competitively in 1st grade for his soccer team in Honduras and then played for a U10 team in Claremont, California under the American Youth Organization. He also been a part of the Orlando City team for the past 6 years. Alejandro was captain for the Timber Creek JV soccer team when he was a freshman and then moved up to varsity where he finished his senior as one of the captains. His plans for college are currently undecided. Alejandro aims at majoring in Engineering with his main interests in Biomedical Engineering with a minor in Bioengineering or Photonics Engineering.

In his free time, he enjoys weightlifting, research and learning about new things as well as fishing. A few fun facts about Alejandro are he sometimes spends hours reading articles about STEM discoveries, innovations and inventions along with the fact that soccer has really defined him as the person he has become today – disciplined, organized, competitive, self motivation and positivity.

A big shout out to Alejandro as you have been an integral part of our soccer program and we wish you the best as you finish your final year at Timber Creek. You will be missed!