The Timber Creek Athletic Department would like to recognize and congratulate sophomore, Trenton Dominguez and junior, Sydney Lake on being voted as our Male and Female Gator’s Dockside Student Athlete of the Month for February. They both exemplified what it is to be a true “Student Athlete” on the field and in the classroom with their hard work, sportsmanship and teamwork.

Congratulations again to these two ’s, our @Gatorsdkside Student Athletes of the Month!

Male Student Athlete of the Month 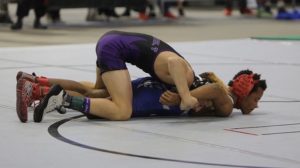 Trenton started wrestling when he was in 7th grade and fell in love with the sport. He finished 5th in the state this season. As a sophomore, Trenton is undecided on what he wants to pursue a degree in. He is a team player and loves helping others out. He also is part of the PIT Crew at Timber Creek.

A big shout out to Trenton for another outstanding season. His hard work certainly paid off  and we look forward to his continued success as he finishes his final two years at Timber Creek.

Female Student Athlete of the Month 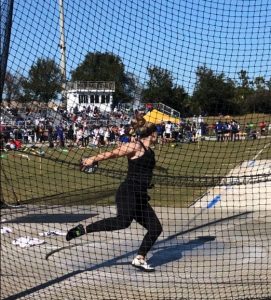 Sydney was nominated by Coach Halsey. Sydney is a junior and second year varsity athlete throwing the shot put, discus and javelin. In the month of February, she averaged scoring 22 points for the team, helping the girls place 2nd overall at the Carl Friedland Memorial Invitational. Individually, she placed 1st and 2nd in the shot and discus in three meets. In javelin, she placed top five in all three meets. Sydney is currently ranked first in the District in both the discus and the javelin.

Sydney started track when she was in 6th grade as a runner and then in the middle of the season, began throwing discus and shot put her 7th grade year. She’s played basketball, weightlifting, dancing, cross country and tumbling. Sydney’s college plans are to pursue a degree in fire science or sports management. She also would like to compete in track & field at the college level. Her hobbies are working out, sleeping and cooking. A few fun facts about Sydney – she’s been to the Junior Olympics four times, she’s traveled more than 75% of the Unites States, she has a twin brother named Maxwell and  has hosted 12 exchange students with her family.

A big shout out to Sydney for this well-deserved award. We wish her all the best as she finishes out the 2020 track & field season. 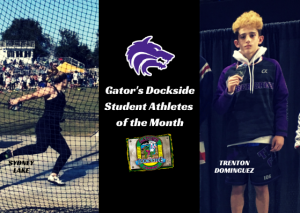