The Timber Creek Athletic Department would like to recognize and congratulate juniors, Ryan Campbell and Carly Holadia on being voted as our Male and Female Gator’s Student Athlete of the Month for February. They both exemplified what it is to be a true “Student Athlete” on the field and in the classroom with their hard work, sportsmanship and teamwork. Go Wolves!! 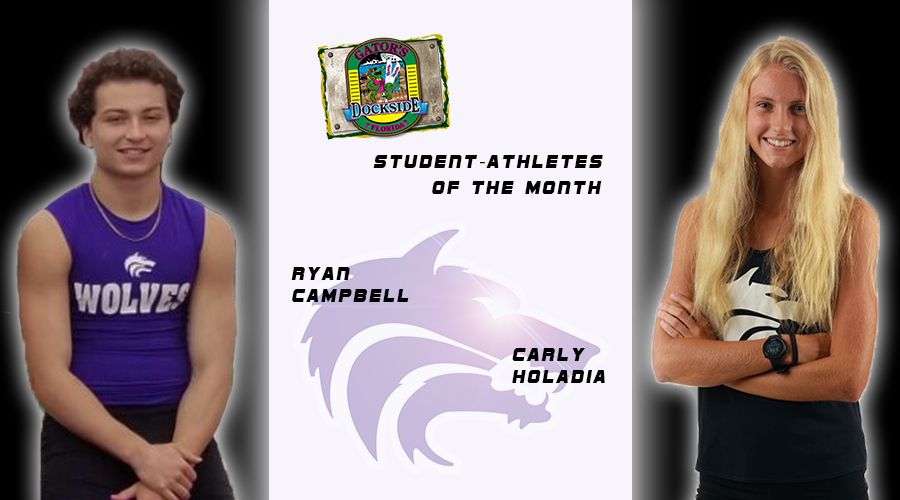 Ryan Campbell (Jr)
Boys Varsity Track & Field
Ryan was nominated by Coach Inglis. Ryan exemplifies leadership and team work. He has set his own personal records in 100m dash, along with being the lead off for the 4×100. He leads by example through his quality performances and helping the rest of the team and his coaches. Ryan also maintains an unweighted 4.0 GPA while being a multi-sport student athlete.
Ryan started running track when he was in middle school and the rest is history. He plans on attending one of the big schools in Florida to attain his bachelors degree. In his free time, he enjoys playing on his phone and playing sports. A little fun fact about Ryan is that he likes McDonald’s ice coffee more than Dunkin Donuts. His hobbies include: playing basketball, football and running track.

Congrats Ryan on representing the purple and black so well – we are so proud of you! Good luck the rest of the season!

Carly was nominated by Coach Halsey. Carly currently has scored the most points for her team across two meets.  At the Lake Howell Silverhawk Open, Carly finished 2nd in the High Jump with a personal best jump of 1.47 meters.  At the same meet, she placed 3rd in the girls open 800 with a time of 2:27 and the closed out the meet by helping lead her 4×400 meter relay team to a second-place finish.  Carly also had standout performances at the Toho Invitational where she placed 5th in the high jump,  2nd in the 800 and 8th in the 4×400 relay.   Carly is a leader and team player; she is always up for the challenge of competing in multiple events to help her team. In the classroom, Carly stands out as well.  She currently has a 3.0 unweighted GPA as she takes multiple AP and honors classes in the APC+ Program.

Carly started running when she was very little (4 to 5 years old) as her mom is a runner so she would join her in some of the local 5ks. Her college plans are undecided at this point but she does plan on running collegiately. In her free time, she enjoys riding horses and simply spending time with her cross country friends. One of the biggest reasons why she loves running is because of the people that are a part of it. They are one of the nicest and kindest people you can meet. Two fun facts about Carly is that she has two adorable little Shih Tzus named Tucker and Percy and that every year of her high school career,  she has run the OUC half marathon with her cross country team.

A big shout out to Carly for all her recent success! Keep working hard and the best of luck to you the rest of the season.