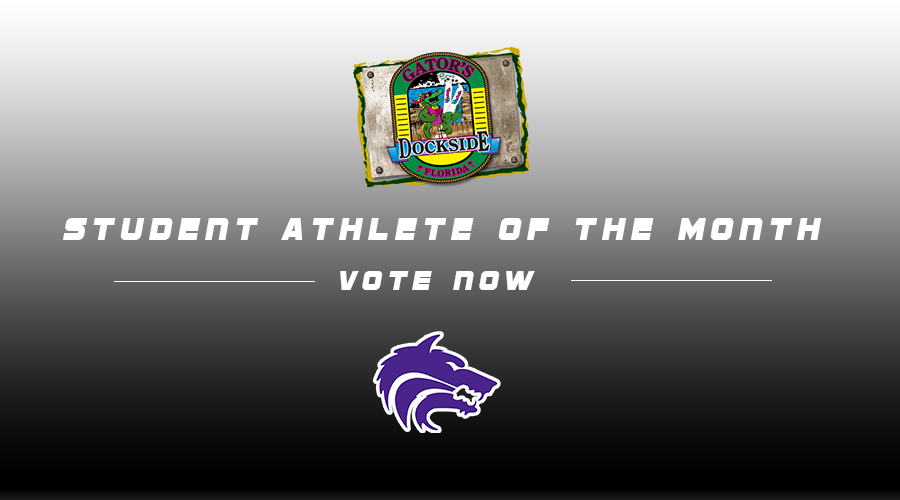 This month we will be recognizing two student athletes of the month for April. The winner will be chosen by the number of votes cast on our website. Voting for the Gators Student Athletes of the Month for March will run from today, 5/3 and will end on Friday, 5/7 at 2PM.  The winning student athletes will be announced next Saturday, 5/8 and will be recognized on our website for the month, receive a certificate of recognition and receive a gift from Gators Dockside of Waterford Lakes. We would like to thank each of the coaches that participated and would like to congratulate the following nominees that were chosen for consideration for the month of April:

Javier was nominated by Coach Beaman. His Batting average was .309 scored with 6 runs and 8 RBIs. He also had a walk off grand slam in the quarter final game in the district tournament this past month. Javier also maintains a weight 3.6 GPA while taking multiple honors courses.

David was nominated by Coach Gordon. David was a guy the team heavily relied on at the end of the season. He was the team’s workhorse, playing wing, man up, offense, as well as on defense. He also had an overtime game winning sudden death goal against Lake Howell to help the team advance to the District Championship game. David is a leader on the team by his actions and his attitude. He always works hard and is a supportive teammate. His stats for the month of April were 9 goals, 3 assists and 18 ground balls.

Lucas was nominated by Coach Inglis. Lucas is an integral part of the track team. He can easy transition from mid distance to sprints.  He’s a quiet leader with a strong work ethic. Leads by example through his accomplishments and is a  fierce competitor. He was the metro conference champion in the 800, district champion in the 800, 4×800 conference and district champions, 3rd fastest in the region 1:57 split and 4×400 conference champions.

Jonah Migliore (Jr)
Boys Varsity Weightlifting
Weight Class | 199lb
Jonah was nominated by Coach Crawford. Jonah finished metro, district and regional champ and tied for 3rd at the state meet in the month of April. Jonah’s work ethic in the weight room is unmatched and he is an excellent example of hard work paying off. Jonah also maintains a 4.0 GPA as a multi-sport athlete.

THE POLL HAS CLOSED. THANK YOU FOR VOTING!

Brooke was nominated by Coach Williams. Brooke is hitting .338 with three homeruns. She is the leader on our team. Every player looks to her to see how she is handling game situations and they feed off of her in every way. She is such a guiding light to the underclassman on our team.  Above her play on the softball field, Brooke has a 4.72 weighted gpa.

Casey was nominated by Coach Halsey. Casey is a sophomore and a first-year athlete on the Track and Field team.  In the beginning of April at the East River Invitational, Casey set a new school record in the Javelin throwing 28.8 meters, which is 94 feet 6 inches.  At the District meet, Casey threw another great throw of 28.47 meters, landing her in first place as the FHSAA 4A District 4 Champion in the Javelin competition.   Casey is also a member of the 4×800 and 4×400 meter relays, she helped the 4×8 team qualify for the Regional meet running an individual split of 2:32.  While new to track and field, Casey is making her mark not only as a team player, but a fierce competitor.

THE POLL HAS CLOSED. THANK YOU FOR VOTING!